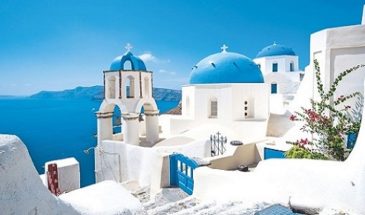 Greece is a country in southeastern Europe with thousands of islands throughout the Aegean and Ionian seas. Influential in ancient times, it’s often…

Greece is a country in southeastern Europe with thousands of islands throughout the Aegean and Ionian seas. Influential in ancient times, it’s often called the cradle of Western civilization. Athens, its capital, retains landmarks including the 5th-century B.C. Acropolis citadel with the Parthenon temple. Greece is also known for its beaches, from the black sands of Santorini to the party resorts of Mykonos. Naxos is the largest island of Cyclades and it is located in the center of this complex, between Paros and Mykonos

Arrival in Athens, Capital & largest city of Greece. After immigration & customs formalities you will be transferred to your hotel. Check-in & Relax at hotel. Overnight stay at hotel.

Today you will have the opportunity to explore the capital of Greece. You have a choice of attending an organized tour with English speaking guide including a visit to Acropolis site and Acropolis museum or you can take the hop on hop off bus and see the most famous landmarks.

Transfer to the port for your ferry to Naxos. Arrival and transfer to your hotel. Check-in. Overnight in Naxos.

Free day in Naxos. We recommend a visit in Portara, the trademark of Naxos. This is the first sight of the island that you get as the ferry approaches the port. It is the unfinished gate of a big temple dedicated to Apollo. Overnight in Naxos.

After breakfast day in Santorini. We highly recommend that you opt for a tour, to visit the Volcano and the hot springs, or the red, the white and the black beach, or to see the Archeological excavations at Akrotiri, or just to marvel the famous sunset in Oia.

Transfer to the airport for your flight back home, having the best impression from your trip!

# Internal Airfare if any

# GST 5% will apply on Total package

# Cost incidental to any change in the itinerary/ stay on account of flight cancellation due to bad weather, ill health, and/or any factors beyond control.

Tour Cost per person in INR: